Explosive Fire on the Sacred Mountain: Summer Solstice Sign for All People

Explosive Fire on the Sacred Mountain: Summer Solstice Sign for All People 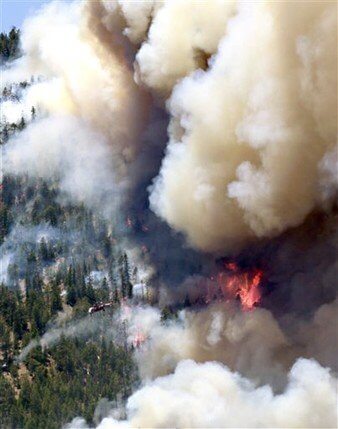 Blow-up on Sunday, June 20 (photos above and below) ignited in the spring wind dried ponderosa pine forest by sparks from an abandoned illegal campfire in Schultz Pass.

On June 20, 2010, I was traveling with a group of New Zealand visitors from Sedona to Hopi and Navajo lands for our summer solstice Time of Vision Retreat. We paused as we came into close view of the eastern side of the San Francisco Peaks to make a personal connection with as we looked toward the inner basin on the northeastern side of the Peaks.

The Peaks are a holy place for thirteen tribes in the region. Silently, respectfully we sent our heart energy out to the spirit of the mountain and sought permission to enter indigenous lands of the Hopi and Navajo peoples. Clear blue skies contrasted with the deep green, still snow-topped mountain slopes and a palpable sense of Presence reached out and encircled us.

Glow of fire on the first night.

That Sunday, the day before summer solstice, kachina spirits, who reside in the inner basin of the Peaks, were dancing in villages on all three mesas. The kachinas portray supernatural helpers who are devoted to the well being of life.

We watched the fire blow up from Hopi Mesas, 80 miles to the northeast of the Peaks that afternoon.

We viewed an ominous towering white mushroom shaped cloud suddenly rose high into the sky from the eastern flank of the mountains. Then, during the course of the afternoon, the prevailing winds pushed a thick black ash blanket directly over all the main part of Hopi. The sun now peered eerily red through the dark veil of smoke.

Explosive Fire and smoke give rise to apocalyptic feelings of ending times as the afternoon wore on. It was like the hot breath of the Creator blowing over us saying: Pay attention. I have pondered this and searched for perspectives to help me understand this deep inner turbulence I continue to feel.

Emotional Responses to the Destructive Fire 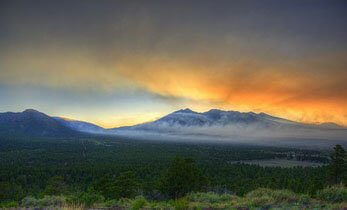 Day 4 fire is still burning and getting larger.

“We, as Native people, are sensitive to ceremonial responsibilities to be able to see signs even though we may not know the meaning at the moment,” are words of wisdom from Uqualla of the Havasupai tribe. “This event’s combination of signs is unusual:
~~was on solstice-season turning and ceremonial time
~~blew up so quickly
~~burned right up to houses below and the sacred inner heart of the mountain above, but spared both.”

Uqualla believes this explosive fire is a wake up call. “We need to raise our consciousness for better understanding and give thought to what is in store. How do we prepare? And how do we return our thoughts back to the Earth Mother? It is as if she is saying: you are not that connected to me and I will take all. Yet she did not take all in this case. How do we make more effort to make connections? ” 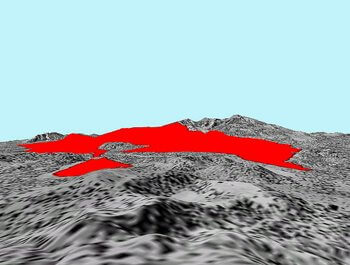 3-D map showing Sunset Crater in the foreground, Peaks in background and destruction path across the east stopping just below the entrance to the Inner Basin 5 days later.

“This is sign we all should take seriously, both the political and traditional worlds at Hopi, and by extension, all peoples around the world…to think about what we are doing,” according to a wise Hopi person I spoke to about this today.

Another Hopi friend commented she felt like the Kachinas were fleeing the Peaks because their house was on fire.

Navajo Nation President, Joe Shirley Jr., said in a media interview that week: “The San Francisco Peaks is the essence of us. She’s our Mother. So when there is a fire on her, it is like we are burning. It hurts.”

I relate to these heartfelt words from Robyn Slayton-Martin, a native of Flagstaff:
“Our mountain is burning in a fire that we hoped would never happen, a fire that has been hanging over our heads like the sword of Damocles. The heart of our mountain is blazing in an inferno that grew from 50 acres to 5,000 acres in 24 hours…Three-hundred-year-old ponderosa pines are exploding in orange flame. ..For many of us, the mountain defines us…This loss is deep. Our community is angry, sad, grieving. We have lost our heart because of someone else’s thoughtless choice. We will be different because of it, and there is no real path to healing.”
Source: essay, The San Francisco Peaks will never be the same, High Country News, June 29, 2010.

Profound words from Black Mesa Trust, a Hopi conservation group: “We believe all waters: the aquifers, the springs, the lakes, the rivers, the oceans, the rain, the snow are joined together. All work in harmony to sustain life. We believe humankind is a participant in water-life. We are of clouds and the clouds are of us. How we behave influences rain, snow and hence the “hydrol0gic cycle and balance”. If our thoughts are bad, only the wind will come when we dance. If our hearts come together, rain will come.”

I believe Mother Earth is talking profoundly to humankind now in voices of extremes of weather. Her scorching purification by fire explodes in front us on a holy ceremonial day of a tribe with 13,000 years of prayerful presence on the Colorado Plateau. Are we paying attention?

By Monday, on summer solstice, the whole eastern side of the Peaks were burning (which reached 15,000 acres by Thursday of that week), coming close to hundreds of homes in Flagstaff and stopping just in front of the area the Hopis call the Plaza in the Inner Basin, home to their Katsina spirits. 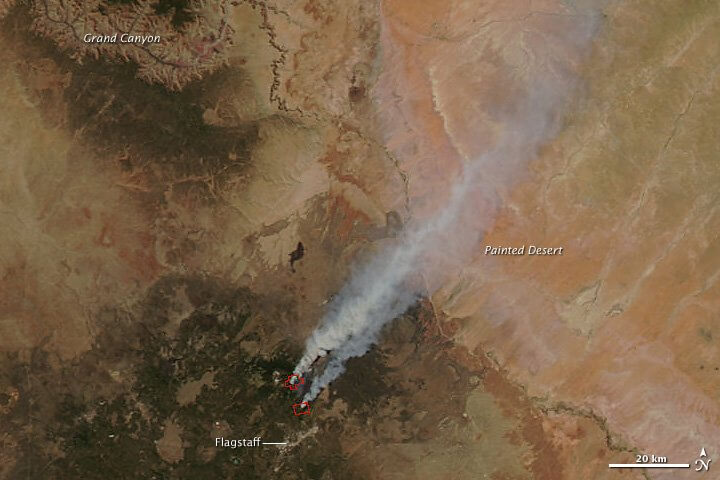 The smoke is headed northeast directly across the Painted Desert to Hopi lands.
Note how close to the San Francisco Peaks are to the Grand Canyon.

Decimation of the forest on the eastern flank five days later.

Honoring Earth Connecting With the Earth Heart to Heart article