Puebloan ancestral sites and rock art of the Colorado Plateau region have fascinated me for many decades. 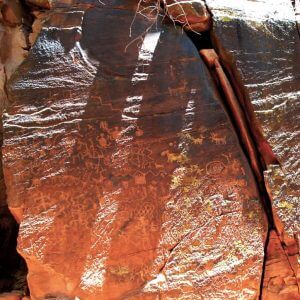 I recently enjoyed an insightful class about Verde Valley prehistoric archeoastronomy sites taught by Kenneth J. Zoll, Director of the Verde Valley Archaeology Center. Ken is author of this excellent illustrated book:  Heart of the Sky, Ancient Skywatchers of Central Arizona. (The book is available at the VVAC in Camp Verde or contact them via VVAC website to order a copy.)

Ken has documented many ancestral sites in the Verde Valley/central Arizona region that reveal prehistoric astronomical practices that are part of their social, religious and agricultural relationship to the landscape.

“The celestial ideas and beliefs of these societies become materialized in the location of rock art, isolated monuments and architecture.  These sites become part of the ceremonial landscape of the people.” (David Bruno and Julian Thomas, Landscape Archaeology) 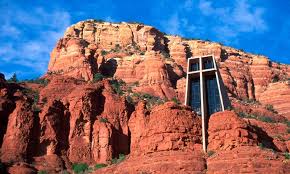 Geologist Paul Lindberg observed* that a 7-room ancestor site on top of the steep-sided west Twin Butte (the formation behind the Chapel of the Holy Cross in photo above) may have been a sun watching observation point.

The photo below shows the Twin Buttes as viewed from the south standing on Bell Rock.

Paul photographed how the summer solstice sunrise makes a wedge-shaped shadow pointed toward toward a notch on top of Cathedral Rock (one of Sedona’s named “vortex” sites in today’s mythology).

The Cathedral Rock photo below was taken by Paul Lindberg at sunrise on June 21, 2009 (summer solstice) from the top of West Twin Butte.

“It shows the shadow cast by the summit of East Twin Butte directly in line with the saddle of Cathedral Rock. This sundial effect must have been known to prehistoric people living in the area as a significant archaeological event. “ 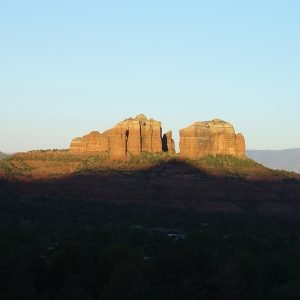 Summer Solstice is one of two major turning points of the year since time immemorial for Ancestral Puebloan cultures and their descendants who are part of today’s Hopi tribe.  Ceremony marks the peak of the light and growth when the first harvest of corn is presented in the plazas. 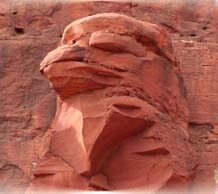 Three different Hopi people who went to the Chapel of the Holy Cross site with me over the past 3 decades made me aware of an eagle head on the front side of the west Twin Butte.  They told me this was carved long ago by their ancestors to identify this area as a sacred site.  The eagle, who flies higher than all others, fits well with this as a ceremonial sun watcher site.

Hopi priests from the eagle, deer and other clans still today visit hidden shrine sites in this area with their prayers and offerings.  The spirit of the Hopi ancestors is still present at this site and hundreds of others in the Verde Valley.  The Hopi prayers are for the well being of Mother Earth and her peoples.  Sites such as the Twin Buttes are connected to and part of the Hopi ceremonial cycle of the year.

The Yavapai-Apache tribe calls this formation, which is next to the East Twin Butte, the Four Sisters.  Four sisters were turned to stone in this place according to tribal legend. 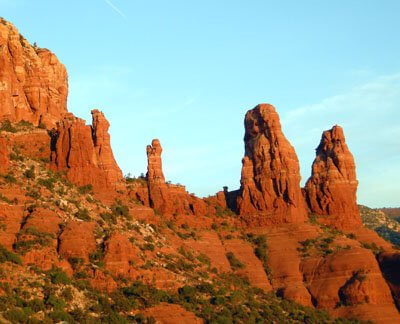 This formation as been called the Two Nuns since the building of the Chapel of the Holy Cross in front of the West Twin Butte in 1957.

Place of Inspiration for Thousands of Years.

These Twin Buttes also overlook a stunning circle of cliffs to the south.  Bell Rock is another modern day “vortex” site (right hand formation in photo below).  Yavapai-Apache people say Bell Rock was a powerful place at the time of humans emerging in this landscape.

I stand in awe at this ancient sacred site and overlooking the circle of cliffs and buttes. I am aware that thousands of years of pilgrimage and prayers that have preceded we humans of today.

*source: Heart of the Sky, Ancient Skywatchers of Central Arizona.