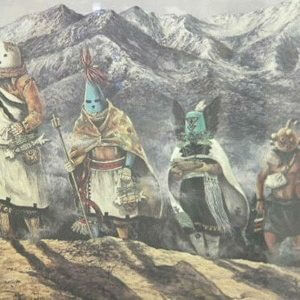 The sacred peaks, known as the San Francisco Peaks, are a holy place for Hopi, Navajo, Havasupai, Zuni, Apache and other tribes. The Peaks are associated with emergence, deities, ancestors, life giving moisture and ceremony and are actively utilized still today.

Hopi and  Navajo people gather plants and herbs and visit shrines and ancestral dwellings.  There are numerous medicinal herbs and other plants at several levels of the Peaks that are used in traditional ceremonies and to treat the ailments of Native American people.   The plants have energies that are place specific–that is, they must come from specific sacred sites to fulfill their proper function. 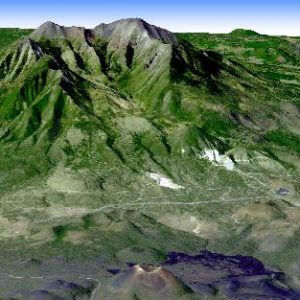 NASA image looking into eastern gateway and Inner Basin of the caldera of the San Francisco Peaks which is surrounded by a crater-strewn volcanic field that last erupted 1064 AD.

The San Francisco Peaks next to Flagstaff, reach 12,633 feet and dominate this southern edge of the Colorado Plateau and are the highest in Arizona. Seen from the Indian country to the north, the high peaks seem to generate their own weather, giving birth to clouds which drift across the Painted Desert bringing rain to the Navajo and Hopi lands. 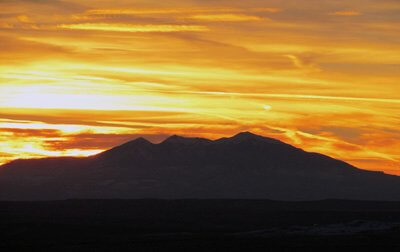 Sun setting on Winter Solstice behind the San Franciso Peaks, the holy mountain of the Hopi people. This is a very special and sacred time of year to quietly share with Hopi people. Spending Winter Solstice with Hopis, one of our guests perceived: “what it means to celebrate the solstice to understand the cycles of mother earth more deeply, subtly, intuitively.” And how “My prayers and my intentions grew from the relative singular to the collective – all of humanity in a fuller way then ever before. Some Hopis never leave their land but their prayer touches the entire world.” Photo by Sandra Cosentino

Hopi Sunwatchers know when the sun reaches its winter and summer solstice position when it appears to rise and set at the same place behind their sacred peaks, the San Francisco Peaks, for about four days. These are the shortest and longest days of the year and the key turning points of the Hopi ceremonial cycle of the year. Pilgrimages are made to the Peaks to connect with their energy during these and other ceremonial times during the year.

For the Hopis, Winter Solstice ceremonies set the pattern for the coming year.  And Summer Solstice is the peak of the growing season when the Katsinom (Kachinas) appear in the plazas.

To the Hopi, the Peaks are Nuvatukaovi, “The Place of Snow on the Very Top,” home for half of the year to the ancestral kachina spirits who live on the peaks and among the clouds around the summit. When properly honored through song and ceremony, the kachinas bring gentle rains to thirsty corn plants. This reciprocity between humans and the spirit world is central to Hopi religious practice.These ways are practiced for the balance of Mother Earth and all her beings. 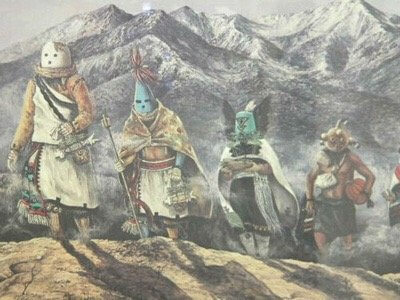 Kachinas on Peaks by John Steele

“Katsinam represent the multi-layered spirit powers who personify nature:  clouds, sky, storms, trees, etc.  They function as protective supernatural beings who can help humans if they are asked properly and respectfully.  They also represent the spirits of Hopi ancestors who, in the form of clouds, bring much-needed rain.”

“The Hopis recognize hundreds of specific Katsinam who personify the forces of nature and the spiritual essence of plants, animals, other tribes, specific people and supernatural forces.  Katsinam return to live in Hopi villages every year, beginning in February after descending from their home on top of the San Francisco Peaks.  The top of the Peaks is considered to be a cloud house, since the Katsinam are manifested as clouds. The Katsinam remain in the villages until Niman, the Going Home Ceremony, in late July, at which time they return to the San Francisco Peaks.”

The Peaks are one of the major landmarks that define the traditional and spiritual boundaries of Hopitutsqwa, “Hopi land” and the territory for which they act as stewards of the land through their pact with Ma’saw, the guardian of this world. ” (above 3 paragraphs from US Forest Service NEPA document)

For the Navajo, the Peaks are the sacred mountain of the west, Doko’oo’sliid, “Shining on Top,” a key boundary marker and a place where medicine men collect soil for their medicine bundles and herbs for healing ceremonies. Dook’o’osliid and the other three sacred mountains are the source of curing powers.

The sacred peaks contain numerous sacred places, such as springs, trails, cairns, offering places, plant gathering areas, and mineral gathering areas.  In addition, rocks, plants, trees, coal, clay, water, and soil are specifically collected from the Peaks.  Each of these is important for specific ceremonies as well as for food and other every-day purposes.

Navajo people (along with Hopi and other tribes) have been very active in recent decades in speaking out to protect their sacred mountain from further ski area development.  See article on Hopis Protect the Sacred Mountain. 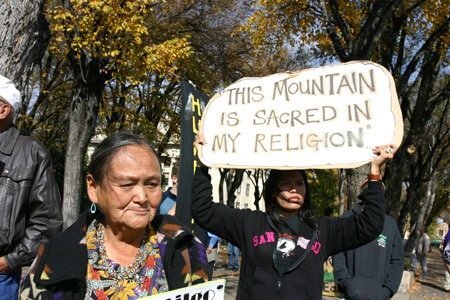 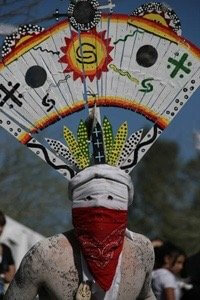 The Crown Dance was taught to the Apaches by the mountain spirits–Gaans– to teach them to live in harmony.

The San Francisco Peaks are one of the “sacred places where the Earth brushes up against the unseen world,” in the words of Yavapai-Apache Vincent Randall. Mountain spirits known as ga’an reside there. Mountains are prayed to because clouds hang on them and Lightning People are on them.

“The Sacred Mountains have always been where they are now.
They have been like that from the beginning.
There were like that in the worlds before this
They were brought up from the Underworld
And were put back in their respective places.

These mountains and the land between them
are the only things that keep us strong.
From them, and because of them we prosper.
It is because of them that we eat plants and good meat.

We carry soil from the Sacred Mountains in a prayer bundle that we call dah nidiilyeeh.
Because of this bundle we gain sheep, horses and cattle.
We gain possessions and things of value.
With this we speak, with this we pray.
This is where the prayers begin.
Excerpts from a poem by George Blueeyes in “Between Sacred Mountains”

Uqualla of the Havsupai tribe says: “This the mountain of the Gods, birther of the Havasupai (people who reside within the nearby Grand Canyon). Giftings from this sacred place continue to come forth to the people. It is the ultimate of rock formations in our ceremonial history. It has a major connection to first springs and first woman. Prayers are sent to this great rock mountain as it is believed to be a conduit to spirit.”

At least nine other tribes in the region have sacred relationship to the Peaks and its springs, plants and relation to the sky and forces of life giving rain.

Sunha K’hbchu Yalanne is the Zuni name for the San Francisco Peaks. The Peaks overlook their sacred place of emergence, the Grand Canyon, and has meaning in their spiritual heritage and landscape.

At least nine other tribes in the region have sacred relationship to the Peaks and its springs, plants and relation to the sky and forces of life giving rain.

From my personal experiences in the inner basin of the San Francisco Peaks, I perceive this as the main power place of the northern Arizona region. Spending time in this place of very high vibrational frequency inspires a sense of uplift and  connection to a higher source of wisdom. For all peoples of this region, this is place we identify with, love and cherish. 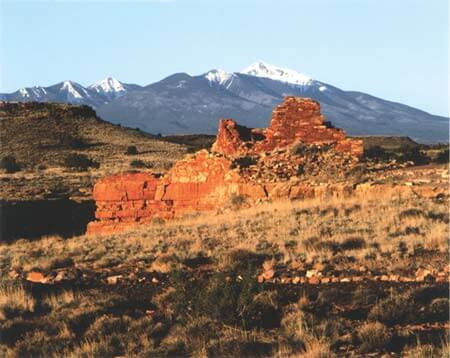 The peaks of San Francisco Mountain, an eroded stratovolcano which last exploded 400,000 years ago. They include Arizona’s highest point, Humphreys Peak at 12,633 feet and tower over the ruins of an ancient Native American pueblo in Wupatki National Monument (above photo). The ancient inhabitants of this area must have witnessed the eruption of nearby Sunset Crater, the State’s youngest volcano, which erupted in about A.D. 1064.

The volcanic highland area of Arizona began forming over 6 million years ago with the eruption of nearly 600 volcanoes. The most dramatic of those eruptions left the Peaks soaring above the landscape in what otherwise would have been dry, arid plateau. Although most volcanoes form near the edges of the tectonic plates that make up the Earth’s crust, Arizona is located far from the boundary of the North American Plate. It is believed that a trapped area of molten rock deep beneath Northern Arizona, called a “hot spot”, occasionally rises up and creates volcanoes as the plate moves slowly west.
(source: USGS)

“Around the planet, indigenous communities still guard their sacred places—mountains, springs, rivers, caves, forests, medicinal plant gardens, burials of beloved ancestors. Everywhere it seems these places are under siege. Each attack is met with a spirited defense because sacred places anchor cultures. They provide meaning. They give life, give information, heal, and offer visions and instructions about how to live, how to adapt, how to be resilient.”

Fire on the Sacred Mountain, Summer Solstice Sign for All Peoples article

Circles of Connection in Hopi and Navajo Sprit-Scapes article

Honoring Ways to Connect With the Living Earth seminar