With excerpts from The Book of Destiny: Unlocking the Secrets of the Ancient Mayans and the Prophecy of 2012 by Carlos Barrios, shaman and member of the Mayan elders council 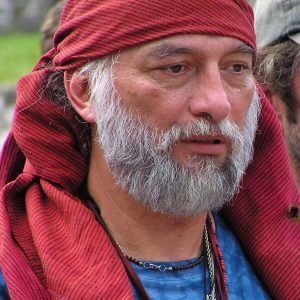 Carlos Barrios was born into a Spanish family on El Altiplano, the highlands of Guatemala. His home was in Huehuetenango, also the dwelling place of the Maya, Mam tribe. With other Maya and other indigenous tradition keepers, the Mam carry part of the ‘old ways on Turtle Island (North America). They are keepers of time, authorities on remarkable calendars that are ancient, elegant and relevant.

Mr. Barrios is a historian, an anthropologist and investigator. After studying with traditional elders for 25 years since the age of 19, he has also became a Mayan Ajq’ij, a ceremonial priest and spiritual guide, Eagle Clan. Years ago, along with his brother, Gerardo, Carlos initiated an investigation into the different Mayan calendars. He studied with many teachers. He says his brother Gerardo interviewed nearly 600 traditional Mayan elders to widen their scope of knowledge. 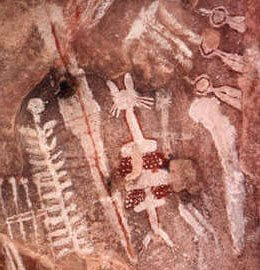 Mystical images of spirit mountain lion and more
from 5,000 years ago or more from
Shaman’s Panel, north rim, Grand Canyon

The power of sacred places of this region and the ancient wisdom that are associated with them has been calling me strongly in these past weeks—so much so, that all other priorities seem muted by comparison.  Answering that call, I spent time communing with the depths of the Grand Canyon on the North Rim last month.  While there, I absorbed the message Carlos Barrios is bringing forth in his book which came out in 2009.  It stimulated new awarenesses of this time that I share with you in excerpts herein.  Sandra Cosentino

Beginning this fall equinox, which is also a full moon, September 23, 2010, we enter period of the Mayan calendar period Mr. Barrios calls the definition.

He believes that this week we are ending the purification period which began in 1987.  This next 2 1/4 years, he says is a time of clearing out old programs and consumeristic patterns which will be replaced with a resurgence of true spirituality and a renewed respect for ourselves and everyone else on this planet.

This is the final phase leading up to sunrise on December 21, 2012 which for the first time in 26,000 years the Sun rises to conjunct the intersection of the Milky Way and the plane of the ecliptic. Some observers say this alignment with the heart of the galaxy in 2012 will open a channel for cosmic energy to flow through the earth, cleansing it and all that dwells upon it, raising all to a higher level of vibration.

“Change is accelerating now, and it will continue to accelerate. If the people of the earth can get to this 2012 date in good shape, without having destroyed too much of the Earth, we will rise to a new, higher level. But to get there we must transform enormously powerful forces that seek to block the way.”
“Many powerful souls have reincarnated in this era, with a lot of power. This is true on both sides, the light and the dark…Things will change, but it is up to the people 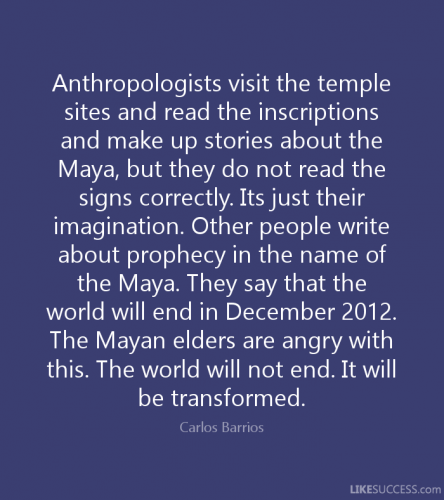 how difficult or easy it is for the changes to come about…The dark can only be transformed when confronted with simplicity and open-heartedness. This is what leads to fusion, a key concept for the World of the Fifth Sun.”

“Everyone who is here now has an important purpose. This is a hard, but a special time. We have the opportunity for growth, but we must be ready for this moment in history.”

“The prophesied changes are going to happen,” he said, “but our attitude and actions determine how harsh or mild they are. Meditation and spiritual practice are good, but also action. It’s very important to be clear about who you are, and also about your relation to the Earth.”

I feel as an internal truth Barrios’ concept that explosions in the universe can be compared to those that take place inside of each of us: one has to explode mentally in order to break free of the limitations of one’s perceptions.  In this way we shatter constraints inside our spirit and consciousness and go beyond it.

“We are just one thread in the wonder we call existence.  We inhabit as reality shaped and modeled after the cosmos, and we vibrate in tune with the movement of the stars.  We find other dimensions by stopping time, and this is achieved in dreams or in absolute stillness.”

“The greatest wisdom is in simplicity.  Love, respect, tolerance, sharing, gratitude, forgiveness. The real knowledge is free. It’s encoded in your DNA. All you need is within you. Great teachers have said from the beginning: find your heart, and you will find your way.”

“The Mayan cosmo-vision is an attitude, an approach to life, it is the way in which we learn to live with our perceptions of reality.  Everything is integral; nothing is isolated from the sequence of life.  Every action is connected to, and forms part of, the cosmic forces, the manifestation of nature and telluric energy.  This convergence arises out of the state of universal consciousness. “ Carlos Barrios

In the light of the full  moon on this Fall equinox, I encourage you to go outside and send your heart’s energy out to the cosmos in a way that speaks to you.  What a great time to be centered in your clear intention in the fullness of this harvest time of year and the moonbeam energy.

Prehistoric Mimbres image of eagle dancer invoking higher frequency vision of eagle.
He is carrying his directionary tools on left and has sunflower emblem on right signifying great abundance.
My dream interpretation of image would be:
he is leaping toward spirit to engender strength and abundance for the future
energizing it by becoming eagle who sees the big picture with confident, penetrating vision beyond our mortal human perspective