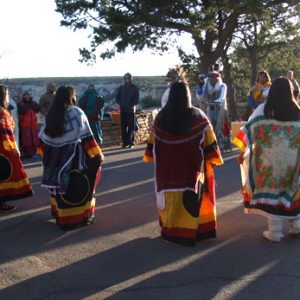 All is made new. Reaching far back into human consciousness is a knowing of the importance of ceremonial circles to align with with the universal patterns of life.

Ceremony is used to create balance and instigate positive change.

Ceremonies remind us that we are connected with all of creation and not separate as our thinking mind perceives.

We can use ceremony to emerge new phenomena.

This spring I participated in many ancient wisdom circles and ceremonies that stimulated a fresh energy, a heightened vibrational frequency and heart connection to other humans sharing this earth walk at this time of great change.  A wisdom thread kept emerging from peoples from many countries and heritages from around the world: 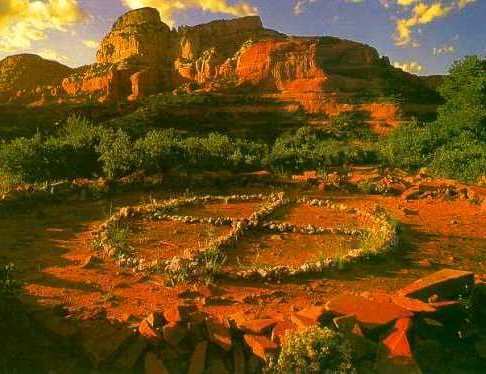 Contemporary medicine wheel–a modern day way of coming together in circle using ancient symbology of the four directions within the circle of life. While appearing to be one-dimensional, the circle radiates energy above and below and out in rays. Dowsers have detected that ceremonial circles can create an underlying water dome actually attracting waters up to the site from below and raise the vibrational frequency of an area.

Ceremony is the intentional use of symbols by humans combined with action wherein the intangible becomes real. The symbol comes to life and movement is activated or acknowledged. Healing-rebalancing occurs in connection to the energetic forces of nature and spirit.

Ancient peoples knew the importance of well planned ways of keeping the balance of the sacred circle. Ceremony is an enactment of basic concepts and elements of a cosmology so that they can be understood by everybody. In this way, a community shares in a mystical experience of sacred knowledge.

Ceremonies also evoke energies to create change, to honor, acknowledge. In participating in ceremony you walk your prayers. Ceremonies are held at the major seasonal turning points such as solstices and equinoxes. Or at times of changing points in the life of an individual—birth, naming, renaming, puberty, marriage. They keep one attuned to the natural flow of life.

Traditional tribal ceremonies have been handed down through generations of Native peoples and are conducted in an exact way.

For example, many traditional ceremonies call in very powerful spirit helpers who must be treated in the appropriate manner. Years of participating and training are required. These ceremonies flow from a context of shared language and wisdom from the their place on Mother Earth.

For more than three decades I have absorbed much inspiration and joy from observing and participating in indigenous ceremonies. I have been particularly touched by the depth of sincerity they put into prayers and creating a positive group energy. And by the power of the sound and honoring ways are used to evoke energy, emotion and positive change.

Native peoples are also role models to me of accepting energies with deep gratitude, trusting in their interaction with a sentient universe.

There is an awakening in our Western world of the need to participate more directly with energies of creation that flow so powerfully through nature. We are co-creating a new earth-spirit way open to all people that is growing out each of our deepening relationship with evolving consciousness of life on Mother Earth.

In ceremonies I lead I am very respectful not to copy from any of today’s Native American tribal ceremonies. I have learned the power of focusing many days or weeks in advance as helper energies are evoked. I listen to my guidance and intuition and use years of experience to bring these universal ways into a living, contemporary form for all people. A kind of surrender takes place as you become a fluid vessel for waves of energy to flow through.

Ancestor stone structures have been found in North America such as this large Bighorn Medicine Wheel.  In the 1980’s, cross-cultural teachers of earth-spirit ways for non-tribal people such as Sun Bear, Berniece Falling Leaves and others may have been inspired by these stone wheels as well as the symbols of the circle and the 4 Directions that are part of most tribal spiritual symbolism.  The “medicine wheel” as a way for people from non-tribal cultures to gather on the earth for ceremony came into expression during this period. 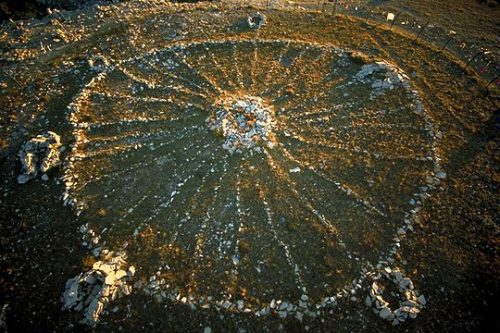 The Bighorn Medicine Wheel in Wyoming (above) has been examined in astronomical detail. The center cairn is 2′ wide and 2′ tall with 28 spokes. One spoke extends outside the rim to a cairn and 5 other spokes have cairns outside the rim. These align with summer solstice sun and the 3 bright stars that appear just before solstice. Using past star charts, one estimate of age of the wheel is 1040 AD. The Bighorn Wheel was reported as being used for fasting and vision questing by the Crow in l922.
About 50 prehistoric medicine wheels and related structures are known in North America. One in Alberta, the Majorville Cairn, may be as hold as 4,500 years, making it about the same age as the pyramids of Giza. One Cree elder said there was a shaking up and a change and then our people came out on the land; we don’t know who built them, but we can tell they were used for sacred purpose.

Sun Bear:  All is made new

Sun Bear wisdom that I know from personal experience to be so true:

When humans participate in ceremony, they enter a sacred space where:
~ Everything outside of that space shrivels in importance.
~ Time takes on a different dimension.
~ Emotions flow more freely.
~ The bodies of participants become filled with the energy of life and this energy reaches out and blesses the creation around them.
~ All is made new; everything becomes sacred.”

I took these images on a very cold, windy dawn at a powerful and joyful ceremony at the Grand Canyon led by Havasupai peoples (they are the ones wearing the ram horns and who live in the canyon) welcoming all peoples to celebrate the essence of the eagle and condor who fly free here.

I feel, too, this is a time of all peoples coming together in heart-centered circles. 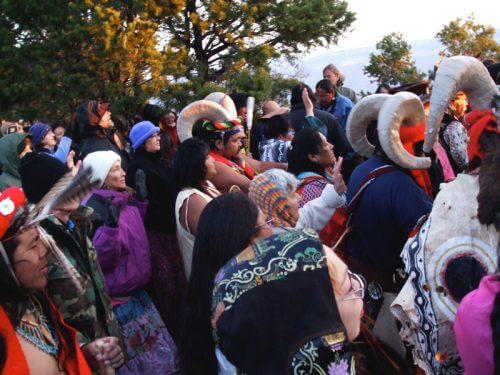 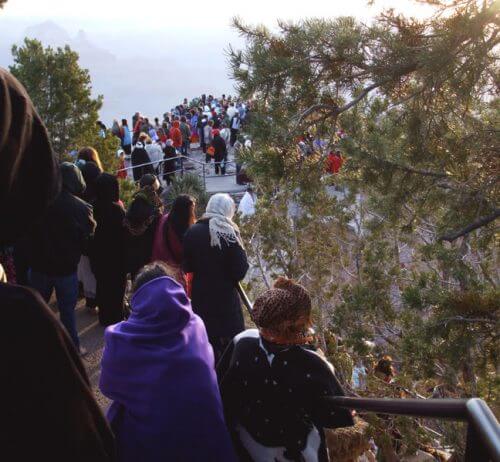