Captivated by the Spell of the Southwest

Call of the Southwest 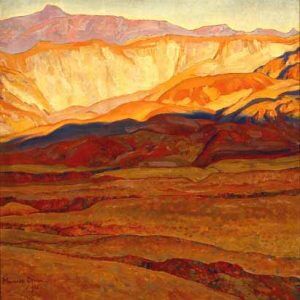 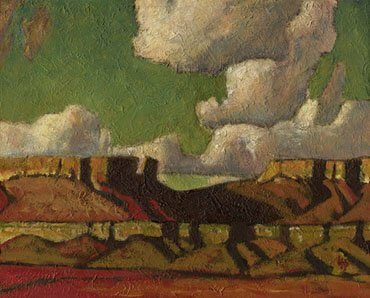 Captivated by the Spell of the Southwest

“The West has an emotional hold on people as a repository of hope.”
Ken Burns: The National Parks.

The Southwestern rugged cliffs and canyons bathed in luminous light places a spell on the beholder. I know, I am one of those Colorado Plateau junkies. Wide open vistas stimulate the imagination.

Freedom is felt as a tangible presence. Infinite possibilities are within reach. Ancient rhythms pulsate in the rock, ruins, living descendants of those who came long before us.

Artist, Maynard Dixon (1875-1946), really understood this.  On this page are a few of his paintings and quotes that capture some of Dixon’s fascination with the Southwest. But I encourage you to a view many more of his wondrous feeling-filled paintings of the Southwest and her Native peoples along with excerpts from Desert Dreams, the Art and Life of Maynard Dixon. (see http://books.google.com/ )

“To me, no painter has ever quite understood the light, the distances, the aboriginal ghostliness of the American West as well as Maynard Dixon. The great mood of his work is solitude, the effect of land and space on people. While his work stands perfectly well on its claims to beauty, it offers a spiritual view of the West indispensable to anyone who would understand it.” (Thomas McGuane)

Ansel Adams once commented that for Maynard Dixon, “the West was uncrowded, unlittered, unorganized and free.” Adams might have added that Dixon would allow no fences to surround him, imaginary or real. 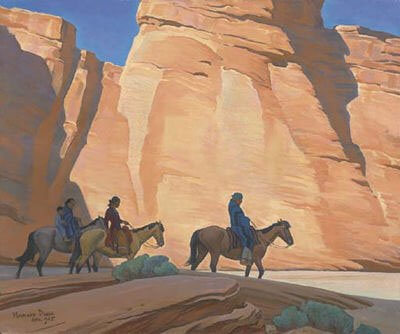 Maynard Dixon was also, for much of his life, a solitary desert pilgrim. From 1900 to his death in 1946, Dixon periodically roamed the West’s plains, mesas, and deserts on foot, horseback, buckboard-even by automobile-drawing, painting, and writing, pursuing a transcendent awareness of the region’s spirit. These long, often solitary excursions into lands “where no one went,” were prompted by intense personal and philosophic examinations.

“Through them I can express that phantasy of freedom of space and thought which will give the world a sentiment about these people which is inspiring and uplifting.”
from: http://www.tfaoi.com/distingu/mdixon.htm 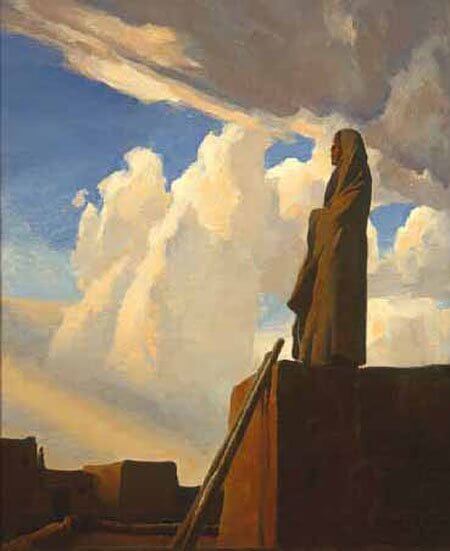 In the 1920’s during the Cult of Primitivism (a time of yearning for a return to nature and an escape from the complexities of modern life when American Indians were often romanticized), Dixon became enamored of the Hopi: “There is something of magic in it and legends endow it with strange meanings. The imagination moves free and the past and present are one. So the visions of the old days have been as important to my work as things actually seen.” from: Hagerty, The Native American Portrayed. 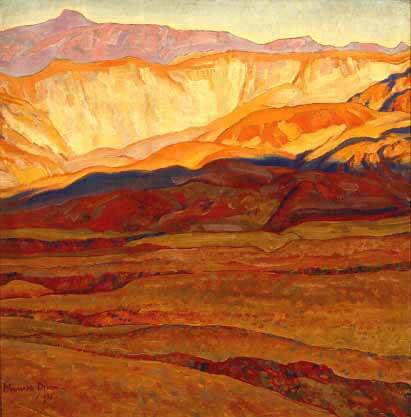 “Dixon was a man of the West not because he was born there or because he painted Western scenes, but because he embraces what the West was and represented: mobility, freedom, possibility and the sense of the infinite. For Dixon, room to move about was not a luxury but a necessity. To know the world, he needed space to listen to it. He needed space for time itself to disappear and for his own poetry to take shape.

And, so do we. We are drawn to the art of Maynard Dixon today more so than ever as space slips away and the desert hush is no longer. Dixon’s West of space, color and intensity is the West of our own physical and spiritual desires: we desire the experience of it more than to merely admire it. We understand the land once more for the healthful and nurturing phenomenon it is.”

from: Thoughts on Maynard Dixon by Will South